I’m posting about an hour early today. It’s not that I’m an early bird looking for a worm or that I’m more organized than usual. No, I’ve got camp induced insomnia. My son left yesterday for camp and, although I looked forward to the peace and quiet of the house being an adult sanctuary, the truth is, it’s just not the same without his smelly boy bones cluttering the place up. 1 day down; 27 to go.

Fortunately, I have my work to divert me and that means that you get Today’s Topline Trends Tuesday an hour or so earlier than usual!

Although it’s not a new way to spend time in the kitchen, preserving is back! In fact, it’s difficult to find a publication that doesn’t have a story or feature about making jam or jelly right now. Specifically, I noted articles in the New York Times, the June issue of Eating Well, the May issue of Waitrose Food Illustrated and the June issue of Sainsbury’s. And in cyberspace, ChezPim has been making (and selling!) marmalade all winter while Jessie presented these quick, fresh pickles in her blog.

While the current crop of preserving articles focus on fruity concoctions, I’m pretty confident that pickling and other canning methods will turn up in the late summer and early autumn issues of many national and international magazines, too.I just hope no one gets to Luke Despatie before I do ‘cause I want to pick his brain and post his pickling tips for you guys here. (Luke’s stand out pickles came in second at his local fall fair, which makes me very curious about the winning pickles; I just can’t imagine any better than Luke’s!) And, of course, my long time friend and colleague Jennifer Mackenzie’s new book The Complete Book of Pickling, is going to be at my elbow all season long, too.

What about you? Are you a committed canner? Newly canning curious? Or, do you prefer to buy your jams, jellies, pickles and condiments fully made and ready to enjoy? I confess that when I was a kid, I loved helping my mom strain jelly but as an adult, I rarely make jam or other preserves since there are so many wonderful ones on store shelves. 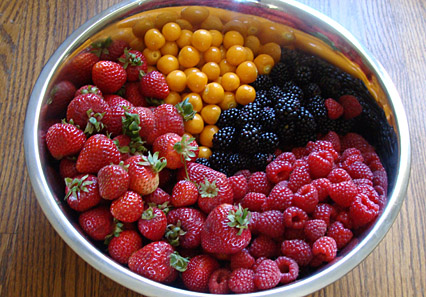 Mmm berries! While the season was off to a slow start, the recently warmer temperatures have brought us some very fine strawberries here in Ontario.

Because my birthday is in early July, I grew up having strawberry shortcake as my birthday cake. Every. Single. Year. Don’t get me wrong, it was always delicious and made with real whipping cream, Ontario berries that my mom usually picked herself and a homemade angel food cake as the base. But, as the saying goes, familiarity bred contempt.

As a result, as an adult, I hardly ever make strawberry shortcake. Instead I usually opt for making fruit salads or custard-based desserts studded with berries and cradled in puff pastry.

My favourite berry by far is the raspberry followed by wild blueberries and then strawberries. To be honest, I’ve never found a blackberry that I’d cross the road for and cape gooseberries (the yellow orbs pictured above) are fun but not a fruit I’d miss if it suddenly became extinct.

What about you? Do you have a favourite berry?

Some days words just flow out of my fingertips and onto the computer screen in an effortless cascade. Today, not so much. In fact, as I sit here trying to form a few coherent sentences, it’s as excruciating as if every word is a hair being plucked from my skin with tweezers. Not fun.

But, since I am very dedicated to this blog, I am here trying to tell you about my new favourite grill.

My son and I spotted this disposable grill at Shopper’s Drug Mart the other day. We couldn’t believe that the regular price was just $3.49 so we bought one immediately. We were sure that once we tried it out that we’d be able to reveal to the world that this device was a piece of crap.

Well, guess what? We were 100% wrong. This grill that costs less than the grande latte I bought on the way home from the drug store worked like a charm. It had lots of heat: I started it at 11:50 am and at 2:45 pm it was still warm enough to melt chocolate or keep a cheese dip molten and ready for tortilla chips to be dunked.

Will you buy one of these grills? If so, what will you make on it?

It’s so awful, but for me, good food is sometimes a burden. For instance, the other day we needed clams and mussels in a bowl for a photo shoot. They were to serve no other purpose than to be themselves for 5 minutes.

At the end of the day they were up for grabs on our food trolley (we basically do a little grocery shop on our way to our cars each day, taking the food that was made between 9 and 5 home for ourselves or others). No one, including me, wanted the seafood. I’d eaten enough during the day and really, I just couldn’t see myself cooking them up into a chowder. But I felt guilty about wasting these creatures for the sake of a 5-minute TV segment so I took them home, steamed them and shucked the meats from the shells and made this little salad. Then, I packed it into a plastic container and put it in the fridge.

Sabrina and I ate it the next day for lunch and you know what? My efforts were well worth the pay off. And, given how hot it is here in Ontario right now. I can see myself making this salad again late one evening so that I have a cold, yummy, protein dish on reserve for dinner.

Here’s how to make one yourself:

• Steam a combination of clams and mussels in a large pot of salted water.
• Drain cooked shellfish in a colander and refresh under cold running water
• Remove meats from opened shells and discard any unopened shellfish.
• Pat the shucked shellfish dry on paper towel.
• Combine drained shellfish, diced red pepper and a handful of chopped parsley in a bowl.
• Drizzle with lemony-dill dressing; toss and let stand for at least 15 minutes.

What are your hot weather entree favorites?

I love the extended daylight we have at this time of year. I feel so much more motivated to get out and do things. Unfortunately, it also seems to lead to less impetus to cook a full meal between the hours of 5 and 7 pm. In fact, it’s this time of year when we seem to nibble and nosh pretty much all evening. A yummy salad around 6:30 pm; some grilled Korean short ribs at 7:30 pm (or when Oliver takes a break from shooting hoops in the drive way with his friends); a bowl of strawberries with ice cream at 9 pm…..it’s an extended meal time pattern that just seems to work at this time of year.

My old friend Julie Van Rosendaal obviously follows a similar pattern. If you read her blog Dinner with Julie, you’ll know that her life is truly hectic.  She has a vibrant media career with crazy hours, a toddler and an abundance of charity commitments that keep her going hither and thither.  Through it all she manages to create, photograph and post some of the yummiest and best recipes in Canada. Besides being part of the new superstar blogger project Good Bite, she’s also just released an updated, newly formated version of one of her books and the timing, for me at least, couldn’t be better. Grazing: A Healthier approach to Snacks and Finger Foods is packed with just the kinds of foods I need for summer. From cheesy black bean dip to hoisin pork lettuce wraps, this collection of snack foods is going to get a lot of use not only next week on Canada Day but all summer long.

I asked Julie what snacks she recommends for this weekend and on Canada Day and she suggestee totally on-trend but still proudly Canadian Dukka Salmon Sticks:

Dukkah is a fantastic blend of spices and nuts that you could eat out of hand or sprinkle on salads, but its intended serving method is to put it out in a shallow bowl alongside crusty bread and good olive oil; you dip the bread into the oil and then into the dukkah. So since there is dipping action involved, here it is. If there is a snack out there that’s good for your heart, this is it.

Preheat the oven to 375°F. Spread the hazelnuts out on a baking sheet and roast for 5-10 minutes, or until golden and fragrant. Transfer them onto a tea towel, fold the towel over and rub them to remove as much of the skins as you can; set aside to cool. (If you’re using almonds, toast them but don’t worry about removing the skins.)

In a dry skillet, toast the sesame seeds over medium heat, shaking the pan often, until golden and fragrant. Transfer to a bowl. Add the coriander and cumin seeds to the pan and toast until they begin to pop; transfer to a food processor with the hazelnuts and pulse until finely ground, then add to the sesame seeds and stir to combine them. Season with salt and pepper and blend well.

To me, these are like candy on a stick; I’d eat the whole lot if no one was around to fight me for them. Salmon is a fatty fish, rich in omega-3 fatty acids, which fight heart disease by lowering triglyceride levels and seem to have a protective effect against some forms of cancer.

Cut salmon into big bite sized pieces. Combine the honey, soy sauce and lime juice in a bowl or large zip-lock bag. Add the salmon and stir or shake to coat well. Cover (or seal) and refrigerate for 24 hours, or at least one hour if that’s all you have time for.

When you’re ready to cook them, thread each piece of salmon onto a bamboo skewer that has been soaked in water for at least 10 minutes. Grill over high heat for a couple minutes per side, until just cooked through, or broil for 3-4 minutes. Don’t overcook them or the salmon will dry out.

Place the sesame seeds in a shallow dish and dip one side of each skewer in the seeds to coat, or sprinkle them overtop. Serve immediately.

Honey-Mustard Salmon Sticks: add 1 Tbsp. grainy Dijon mustard to the marinade mixture instead of the ginger.

Honey, Garlic & Ginger Sesame Chicken Sticks: add 4 crushed cloves of garlic and a pinch of red pepper flakes to the marinade, and use skinless chicken breasts or thighs in place of the salmon. (They’ll take a little longer to cook.)

Dukkah Salmon Sticks: don’t marinate the salmon at all, but cube, brush with a little oil and cook it on skewers as directed. Instead of sesame seeds, dip each piece into a shallow dish of dukkah

Recipe, variations and photo reprinted with permission of the author from Grazing: A Healthier approach to Snacks and Finger Foods (Whitecap 2009).