Struggling with gift ideas for the cooks on your list? Here are two great ideas — one a bit extravagant and one less expensive -– that are sure to make the grade and not likely to be in their cupboards already:

‘I like you!” gift idea: Cupcake pens can be used to decorate all kinds of baked goods whether you’ve got artistic flair or two hands worth of thumbs.

“I love you!” gift idea: Yogurt makers aren’t just for people who wear sandals and socks (They used to be but things have changed now – I checked.) and this one is the Mac daddy of them all offering flexible timing options and the ability to make up to 8 flavours at a time! Seriously, 8 flavours.

If you’re an avid cook, what’s on your wish list this holiday season?

Last week’s party trick was so much fun, that I think I’ll offer another!

I wish I could take full credit for this idea but truthfully, this picture appeared in Donna Hay magazine originally. When it was featured in her magazine, Donna’s team recommended popping cooked, lightly sauced pasta in a parchment pouch with raw seafood and then heating it gently to cook the shellfish and reheat the pasta.

I love this idea for entertaining since serving pasta to a crowd can be a rather steamy, messy affair that leaves the hostess’s hair either limp or frizzy. So, if you’re a pasta lover but don’t have perfectly bouncing and behaving locks but like to look good form company, this idea is for you!

Do you often serve pasta for company? If so, do you go for baked dishes like lasagna or brave the humidity and cook noodles in a vat of salted water? 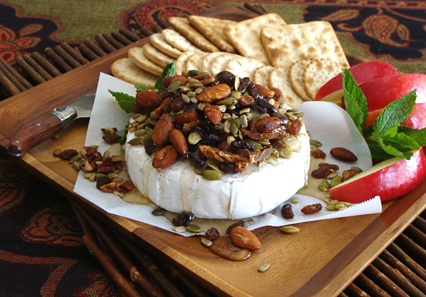 The challenge: make a great looking appetizer that tastes fantastic in less time than it takes to wiggle into your party clothes.

Place the cheese on a platter and drizzle with some honey. Mound some of the trail mix on top. Drizzle with a bit more honey and serve with grapes, apple slices and crackers.

Need a wine match? Try an off-dry Riesling for white drinkers or a light, fruity pinot noir for a red choice. Can’t decide between red or white? Prosecco is a great match, too!

Now that you’ve seen my favourite party trick, tell me about yours!

Every where I turned last week I ran into French onion soup: commercials, blogs, cookbooks. It almost seemed surreal but certainly not bad.

For me, French onion soup has a retro appeal that’s hard to beat. When made well, it’s a rich, full-flavoured broth that begs tender, sweet onions to bask and linger. Instead of covering it with a heavy, greasy layer of cheese, I prefer to make a Gruyere-topped crostini that you can either float on top of the soup or stand up on one side of the bowl.

Regardless of how you position the cheese and bread, be sure to choose good quality Gruyere cheese. I think it’s much yummier than regular Swiss cheese. Given a choice, I buy Gruyere that has been aged for 10 to 12 months since it has a rich, nutty flavor. Gruyere also has a medium fat content so that complements the flavour of the onions without overwhelming their zesty taste.

Add sherry and Worcestershire sauce. Stir to scrape up any brown bits. Add the broth and bring soup to a boil. Reduce heat to low and simmer for 15 minutes.

Preheat the broiler to high. Toast the baguette slices on a baking sheet until golden on each side. Sprinkle cheese and parsley (if using) even over the toasts. Broil until cheese is bubbly and golden. Ladle an equal amount of soup into each bowl. Top with a cheese crouton and serve immediately. Makes 6 servings.

Quiche me if you dare 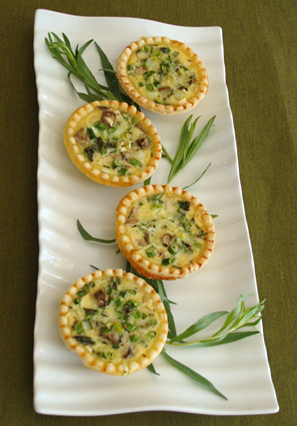 It’s that time of year again. Time to pull out your cocktail party clothes and brush up on current affairs because the holiday season party invitations are going to start rolling in!

Or, maybe you’re thinking of hosting a holiday shindig. If so, chances are mini-quiches are on your list. They’re a party time stand-by but unfortunately, so many of the bought frozen quiches are just awful! Yet, people keep tossing their good money away by buying them. Such a shame when they are so very easy to make ahead, freeze and then heat in the oven when you need them.

Seriously, that’s it. Then, toss some yummy stuff like cheese, ham, salt, pepper, mustard, green onions and such together and divide them evenly between blind baked tart shells. Fill with the egg mixture and bake at 350ºF (180ºC) until the filling is jiggly and just barely set. Cool to room temp, place in zip top bags and freeze until needed. To serve, bake from frozen on a parchment-lined baking sheet at 350ºF (180ºC) until the crust smells toasty.

Tacos. They aren’t just filled with chili powder spiced ground beef anymore. Recent trends have seen fish tacos win fans from coast-to-coast and so-called Korean Tacos trucks are cruising the streets in big US cities like LA, New York and Seattle. Likewise, meatless tacos and tacos that feature slices of meatloaf as the star filling have recently been featured in national magazines.

At our house, tacos are a regular menu item. We’re soft taco lovers and I’ve been known to fill our shells with pulled pork, vegetarian chili, seared hoisin glazed duck and even stir-fry.

What happens at your house? Are you a taco kit household or an anything-goes-in-a-tortilla household like ours?

Give thanks for Brussels sprouts

Raise your hand if you don’t like Brussels sprouts. Okay, now put your hand down so that you don’t reflexively hit me when I tell you that you can like this cruciferous veggie. In fact, you can make it this weekend for Thanksgiving dinner and get rave reviews. I speak the truth.

I know it’s hard to believe me when there are so many nasty Brussels sprout memories competing with my claim. But trust me: the reason you don’t like Brussels sprouts is because you’ve eaten them either 1. overcooked or 2. cooked when they were too old. Honest.

In fact, I didn’t think I liked Brussels sprouts either until I started buying them on the stalk and learned that they don’t need to be boiled to death.

Ready to take the plunge? The first step is to find fresh, young Brussels sprouts. You can hit a farmers’ market or a good grocery store that brings in fresh, local vegetables. While on the stalk, the sprouts should be firm and the outer leaves shouldn’t be yellowed or wilted in any way. The stalk should be pale green and heavy. To use the sprouts, simply cut them off the stalk and peel away any loose outer leaves. Easier than shucking corn!

Heat the oil in a large, deep skillet set over medium heat. Add the leeks, garlic, thyme, salt and pepper. Cook, stirring often, for 5 minutes. Increase the temperature to medium-high and add the sprouts.

Stir-fry for 3 minutes. Add the water and simmer, stirring occasionally, for 3 to 4 minutes or until liquid is evaporated and the sprouts are almost fork tender.

Stir in the maple syrup and mustard. Cook, stirring often, for 2 to 3 minutes or until the sprouts are browned and fork tender. Taste and adjust seasoning if necessary. Makes 6 servings.