I got a beef 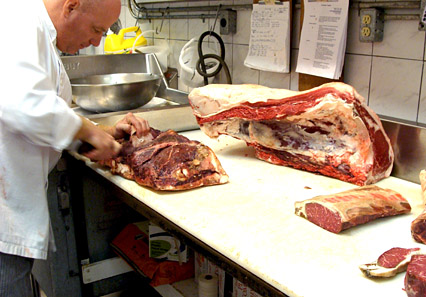 Let’s make today “hug a butcher day” – and I don’t mean that high school dropout kid who works at the local grocery store wrapping up the meat that arrives pre-cut and ready to hit the shelf. I mean a real butcher. Someone who knows how to cut meat and age meat and make a well-raised animal taste as good as it deserves to taste after sacrificing its life to be your dinner.

I recently met chef-turned-butcher Peter Bochna of Absolutely Fine Foods in Toronto’s west end. Not only does he dry age beef and lamb on premises in his store, he cuts it expertly as well.

“No one is teaching the younger generation how to be true butchers,” notes Bochna. “In chef school, butchery class is about cutting meat up; aging techniques are generally ignored. And, most meat processing plants are organized like factories where each person repeats one aspect of the overall process over and over all day long.

“I’m trying to teach my staff how to coax the best flavour and texture from meat at every stage after it comes from the abattoirs and to teach them how to understand how the breed and feed each animal ate while it was alive affects the decisions you make later at our stage of preparing it for people to eat.”

Sigh. People like Peter deserve our business and admiration. I just wish his shop was closer to my house so I could buy all my meat from him. 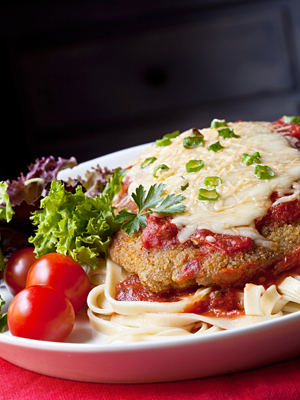 According to a recent article in Marketing Daily, comfort foods choices differ depending on age.

While baby boomers say they find classic comfort foods such as braised meats, casseroles and ice cream soothing, Gen X-ers cite fast food hamburgers and burritos near the top of their lists. While this may seem discouraging, the good news is that Gen-Y-ers like burgers but also mention sushi and fruit as comfort foods.

For me, almost all food is comforting (seriously, I get quite uncomfortable at the first signs of hunger), but one of my favourite meal choices to massage away the tensions of a long day is veal Parmigiana with spaghetti and tomato sauce; homemade is ideal but I often settle quite happily for the take away version from Abruzzo Pizza. When I need some mental health food and I’m not actually hungry, coffee-flavoured Hagen Daz ice cream is my treat of choice.

I’m not quite a baby boomer by age (that age group cut off is 1964 and I was born in 1966) but as my comfort food choices attest, I’m more like the Boomers than the Gen X-ers. However, the fact that my choices are bought foods that I note by brand is distinctly like a Gen X-er. Confusing.

What foods do you find soothing? And, if you don’t mind sharing, what age group category best defines you?

To say that it’s a bull market for grass fed beef would be true but it would also be a cheap pun so I won’t do it. Oh, wait… too late.

Moving on to the meat of the matter, just what is grass-finished beef? Most beef cattle eat a combo of grass and hay for part of their lives; however, they are generally moved in from pasture to a dry lot to be finished on an all-grain diet that consists mostly of corn. This diet change allows the cattle to gain weight quickly and produces a yellowy-coloured marbled and leaf fat that adds succulence and flavour to the meat – two things most consumers praise in a good steak or rib roast.

Grass-finished cattle aren’t put on a finishing diet. Instead, they stay on pasture until just before they’re slaughtered. The end result is leaner meat with higher Omega 3 content; however, the taste is different, too. While some people call it “beefier,” other people find grass-finished beef tougher and not as juicy as grain-finished meat.

But, even some of these folks are switching to grass finished beef because the farming methods used to raise it pose fewer health and environmental risks; likewise it has appeal because this is the natural diet cattle would eat if they roamed free.

Have you tried grass-finished beef? If so, did you miss the taste that a grain diet lends to the meat? Or, did you prefer its clean, beefy taste? 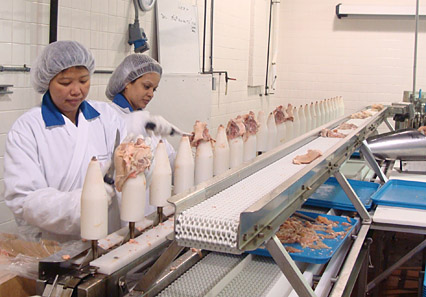 If you’ve seen the movie Food Inc., you’ve likely been spending a bit of time wondering how the food you buy in the grocery store got there. I know I have and to help understand the process a bit better, I’ve been visiting as many food plants as I can persuade to let me in. Last week I visited the state-of-the-art plant operated by MacGregor’s Meats and Seafood in Woodbridge, Ontario where they have separate rooms devoted to processing chicken, fish and meat. I learned a lot there (I’ll be writing more about my visit in the weeks to come) but by far my favourite revelation was watching these technicians skillfully trim fresh chicken breasts.

I’m sure that if they were to tell their friends that they spend all day doing boob jobs that no one would envision this scene!

How do you buy your chicken? Whole, bone-in or cleaned and ready to cook?

Don’t you hate it when you find out that because you weren’t properly informed you wasted money?  I’ve long been a fan of metal probe-style instant read thermometers. As I’ve written before, they help you to cook meat not only safely but also to the perfect level of doneness. I knew these thermometers need to be tested frequently (especially after being dropped) but whenever I found one to be on the fritz, displaying a temperature out of whack with normal  temperature standards, I threw it away.

At an average of $15 each, that means that over the last few years, I’ve thrown out well over $100 worth of instant read thermometers!  That’s money I could have spent on dinner out at a nice restaurant, a facial, bonbons, beer or some other necessity of life. (Or, I guess I could have saved it,  but whatever.).

Essentially that cash went into my trash can and then into land fill since almost all instant read thermometers can be calibrated. I learned this info when I took a safe food handling course on Sunday and I’ve been mad at myself ever since for not knowing that these tools are easily adjusted.

As I got over the initial embarrassing sting of how I’ve wasted money, I realized that if one person doesn’t know about something, there are likely others who aren’t informed either. So, today, just in time for grilling season, I’m going to teach you how to check your instant read thermometer for accuracy and how to fix it if it fails the test.

Did you know how to test and calibrate an instant read thermometer before reading today’s post?  Or, am I the only one who didn’t know how to do this task?

NB: If you need info about how to use an instant read thermometer, check out this post from last spring.

From foie gras bans in select areas to increased awareness about the folly of eating folk-lore inspired delicacies such as shark fin soup, chefs, retailers and consumers are becoming increasingly conscious of how food choices affect the well-being of not just other creatures but the planet. In fact, I learned last week from Cheryl’s blog that the issue is on the election roster for her and other Californians in November, too.

On the heels of research that shows that North American consumers are willing to pay 10% more for humanely raised meat, a new certification program in the US called American Humane Certified was launched to help responsible producers entice consumers to buy their products.

Despite such efforts, practices such as shark finning continues; foie gras is ubiquitous on most high end restaurant menus and suckling Berkshire or Du Breton piglet cause patrons to squeal with delight when it’s featured on a Toronto menu.

Why, then, does veal continue to be so very taboo? What makes a succulent grilled veal chop less enticing than a cracker topped with goose liver pate or a slab of tender, crispy skinned suckling pig? My only guess is that there’s no publicly acknowledged attraction: foie gras is a luxurious, status product; pork is the new hedonistic pleasure; and, shark fin soup is linked erroneously to virility. Veal, on the other hand, is seen as undernourished, incarcerated beef.

Interestingly, in the UK, there’s a movement to woo consumers to buy something called rosé veal by educating them about how uncrated, grass fed veal saves the lives of male dairy cattle who would otherwise be destroyed. The campaign launched earlier this year and as yet, I haven’t heard how successful it’s been.

I’m not entirely sure where my own feelings net out on this issue. I admit to behaving hypocritically: while I vehemently oppose shark finning and boycott restaurants that serve shark fin soup, I eat veal often and enjoy foie gras on occasion. Heck, I use eggs and cook chicken with abandon even after seeing pictures of battery hens living in conditions so cramped that they can’t take a step left or right. Somehow I turn off this knowledge in the kitchen.

How do you rationalize your food choices? Will a certification program like American Humane Certified entice you to spend more for meat, dairy and eggs to ensure animals are respected and treated better?

The food I associate with summertime weekends is just as important as sun and fun. Together, these factors contribute to the mounting anticipation I feel as summertime approaches. Burgers, rotisserie-turned roasts and whole chickens, sticky ribs and buttery fresh corn are the foods that epitomize fantastic summertime weekends.

In the past, people like me have needed to work for their summertime grilling satisfaction. I’ve spent hours burning charcoal down until only embers remained, brined and marinated and rubbed meats with secret ingredients and then lovingly cooked the food, stopping often to baste and brush, hoping to produce great memory-making foods. Now, on almost any summer weekend, I can attend a championship grilling event where professional grillers make and sell ideal versions of these summery foods.

If you haven’t heard of it before, championship grilling is a ‘sport’ that’s perfect for people who like to eat ribs, inhale mesquite smoke and drink beer. It’s a macho domain that, although not athletic, is taken very seriously by those who participate. In fact, placing at the Memphis in May, Kansas City BBQ Society or Florida BBQ Association grilling events places any griller in the professional category and qualifies him or her to go to the world championships in Belgium (no, really, they do grill in Belgium. It isn’t only about French fries there). Here in Canada, we have some mighty fine grillers with a professional league of our own. Check out the Canadian Barbecue Association’s calendar of events for opportunities to get your fingers sticky this summer.