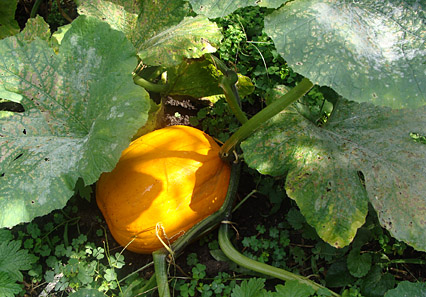 I’ve had challenges as a grower of pumpkins. Last year, despite planting seedlings from an entire packet of heirloom seeds, I only got one (albeit a beauty) pumpkin for my troubles. That’s it pictured above. Lovely, isn’t it?

This spring I started pumpkin seedlings in my little greenhouse only to have each of the sturdy stalks that popped up die over night when I transplanted them to larger pots. It was a sad morning.

So, given my lackluster track record, I’m trying something new with the two new packets of seeds I bought last weekend. I read an article in Grow Magazine about planting squash and, knowing that pumpkins are a type of squash, I’m following their instructions. My hope is that I can, with good luck, create a vision of spooky splendour this Halloween using my own crop.

Here’s what the article suggested:

1. Make a mound of dirt in the sunniest part of the garden. (check!)
2. Dig a hole in the centre of the mound and sink a plastic nursery pot into the hole. Back fill around it so that the empty pot is submerged in the soil. (check!)
3. Plant the pumpkin seeds around the submerged pot as directed on the package. (check!)

What’s the purpose? Well, you can add water to the submerged pots and water the roots of the plants more effectively!

Will it work? Only time will tell. At this point I don’t even have sprouts showing but I’ll be sure to get back to you as the season progresses.

Do you have any pumpkin patch tips for me? 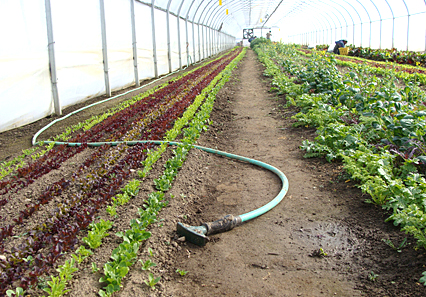 Check out this amazing greenhouse! It’s one of three that David Cohlmeyer of Cookstown Greens uses to grow baby greens all winter long (I took this picture when snow was still on the ground!). I haven’t been in a lot of greenhouses; however, I was amazed to see that David is growing greenhouse plants in soil. All the other greenhouses I’ve seen have featured plants in containers. As a result, most of the mature greenhouse-grown food I’ve tasted hasn’t matched the flavour of foods that do most of their growing in a field.

In David’s opinion, that traditional type of greenhousing poses problems on other fronts, too: “Conventional growers think they know everything that plants require and can mix up chemical concoctions which they mix into a medium (typically based on peat moss) in which to hold the roots. This ‘synthetic soil’ is what you see in most greenhouses. This is quick, cheap, productive, and usually pest and disease free. But the sustainability of this system is questionable.”

For home gardeners, a ground soil based greenhouse isn’t terribly practical since water tubes heated to 30 degrees Fahrenheit are needed to keep the soil warm enough for the seeds to germinate and thrive. What home gardeners and food lovers can learn from David’s soil-based greenhousing is that crops grown in greenhouses can actually taste great and give us access to locally grown food all year round.

Do you buy greenhouse-grown crops often? I admit that I’ve been a sucker for the hydroponically grown bibb lettuce that comes in a plastic bubble container.

Meet three newly developed Ontario pear varieties. For the next few years they will be sold in small quantities at farmers’ markets so do look for them there. Once production increases, widespread grocery store distribution will be possible but that won’t be until 2014 or so. It sounds like a long time but not nearly as long as it took for them to be chosen as viable commercial crops.

Through natural breeding techniques, these three new pear varieties were developed to be not only resistant to fire blight and other diseases but also winter hardy so that they can flourish in the harsh Canadian climate. According to Ken Slingerland, a pear specialist who works to develop new pear varieties, it took more than 10,000 attempts over 30 years to come up with these 3 commercially viable pears.

At a media event held last week in Toronto, Ken told me that over the next two years 50,000 new trees will be planted by Ontario pear farmers so that we can eat locally grown pears well into December.

I took home one of each of these new varieties so that I can have a taste of the future. So far I’ve tried the Harrow Crisp (the little one in the centre of the picture above) and it is very sweet and delicious. The other two new varieties are Harovin Sundown (left) and the not yet marketer named HW620 (at right).  I’m still waiting for these two pears to ripen but if my Harrow Crisp experience is any indicator, I think they will be delicious, too!

How can you get your hands on these new pears?  You can haunt farmers’ markets in the Niagara region or, next spring, look for tree stock at garden centres and plant a couple of these trees in your backyard (note: when planting pears you always need at least two trees so that they can cross pollinate).  If that sounds like too much effort, then look for Ontario Bartletts, Anjou and Bosc pears in the grocery store. They are still a fabulous local choice and this year, instead of sending much of the fresh crop to be canned, growers have made a deal with grocery stores to deliver these fresh, local pears throughout November.

What’s your favourite way to enjoy pears?  I love them eaten out of hand or baked in a pear upside down gingerbread cake. Yum! 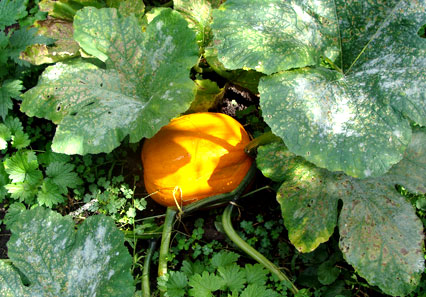 Wow! Looking back over this week’s posts, I see that I’ve turned into a grocery concierge or something. Fortunately, your wallets are safe with today’s post since it’s all about my pumpkin.

That’s right. This crop has produced a singular fruit. As in one lone pumpkin. Oliver and I planted a lot of pumpkin seeds and transferred three sturdy plants out to the garden in spring but alas, only one plant survived (and thrived) and it only produced one pumpkin. But what a pumpkin it is – behold its long faced future jack-o-lantern’s beauty!

Who could ask for more? Certainly not I!

Now I just need to keep it safe until Halloween. Any advice? Should we leave the pumpkin on the vine? Or, should I cut it off and put it in the cold cellar? Your advice is appreciated.

When I heard this morning that our temperature had dipped to a lowly 8 degrees celsius last night I had a bit of a panic attack. My heirloom tomato plants (brandywines, cherokee purples) and my two big boy tomato plants have produced a plentiful but late-to-ripen crop.

So, today I staged a tomato rescue. I’ve spread this bounty out now on parchment-lined baking sheets to ripen. I’ll report back to you about whether these potentially delicious orbs ripen or atrophy. Keep your fingers crossed!