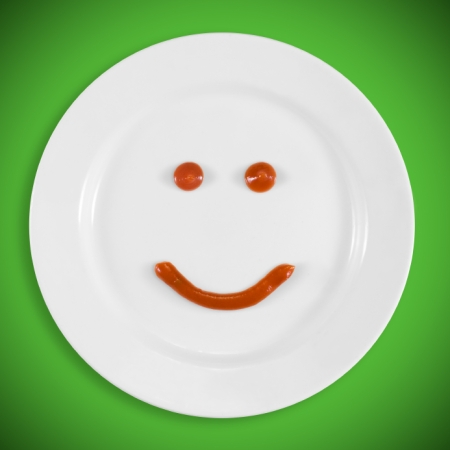 One of my favourite sayings is “life has a life of its own.” For me this cliché has proven itself to be very true. You can set goals, plan and anticipate the steps you need to take to travel from point ‘A’ in your life to point ‘B’ and have general success in your planning; but, along the way, life will take a few unexpected turns that will ultimately take you to the place you really need to be.

That’s the story of my career, in fact. People think I was very clever to get a degree in English literature and then go to chef school to become a food writer. However, in all honesty, I went to chef school dismayed by the lack of job satisfaction brought my way by my university degree. Chef school was supposed to lead to a restaurant career. In the end, the two bits of training conspired without my knowledge and led me down a wonderful job path as a food writer that I wouldn’t trade for the world. My life just somehow turned out.

The same is true about my attitudes. Over time, they’ve evolved and I’ve grown confident enough to own up to my less than gourmet food proclivities. For instance, I grew up in a household where Heinz ketchup was on the table for every meal. My father and brother slopped it over eggs, sandwiches, mashed potatoes and meats of all kinds. While I was always a user myself (French fries and Grilled Cheese are just not complete for me without ketchup!), I was a terrific critic of my family’s slavish ketchup use – especially after I became a chef school student and perfected my disdainful sneer.

As fate would have it, when I transitioned from restaurant chef to consumer recipe and food writer, Heinz became one of my customers. Over the many years I’ve worked with the brand, I’ve taken that condiment to places my father and brother literally would never, ever have envisioned on their own. I dare say, I’m the one who sometimes grosses them out now. From grilling sauces and meatloaves to pad Thai and sweet and sour chicken; our test kitchen has developed, tested or edited every single recipe on the Heinzitup! website.

Our latest triumph is using ketchup as an ingredient in layer cakes. While Amy Snider and I could have just sloshed ketchup into any old recipe and crossed our fingers, we took a step back and thought about what ketchup could offer a cake recipe to make it better or easier than making a similar recipe that already exists. In the Great Canadian Heinz Ketchup Cake, the ketchup is a short cut ingredient that adds the flavours of cloves and ginger that make a terrific pantry spice cake. (BTW, you can see the team at BT Toronto tasting our cake this morning.)

Given how entwined my own life has been with ketchup, I’m not surprised that as Heinz celebrates its 100th anniversary in Canada that it’s still one of our favourite condiments and short cut ingredients. I don’t know what the next 100 years can hold for ketchup lovers, but somehow I have a feeling that in 2109, it will still be common on many Canadian family dinner tables.

Do you eat ketchup? And, if you do, are you loyal to a particular brand? 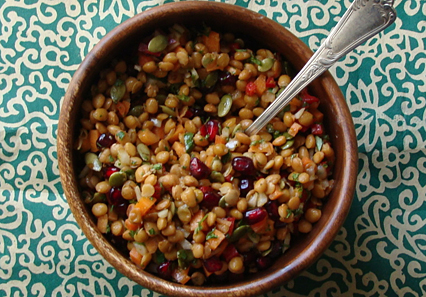 While I’m really not liking this new marketing term “uber cocooning” (why not just call people shut-ins or hermits?) I worry I could be mistaken for one. You see, I do love a well-stocked pantry. It just makes life so much easier to be able to make a great recipe literally right out of the cupboard.

Case in point: this lentil salad that I made recently for my Sunday lunch. The genesis for this bowl of yummy stuff was a humble can of lentils that I drained, rinsed and put in a bowl. Subsequent scavenging led to the discovery of green pumpkin seeds, a carrot, a quarter of a red pepper, a hunk of a forgotten pomegranate, some coriander and a shallot. A little chopping and a very few minutes later, my salad was born as this concoction dressed with a curry flavoured dressing.

Delish on a dime and in no time!

By the way, here’s how I made the Curry Vinaigrette:

Blend the curry paste, honey, ginger and vinegar together until smooth. Stir in the garlic and while whisking, drizzle in the oil. Season with salt and pepper to taste. 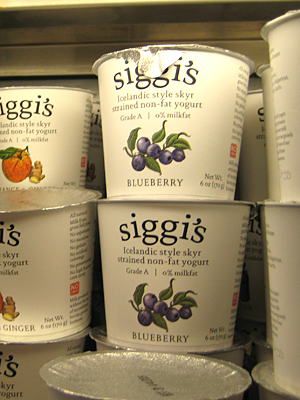 Even while the Mediterranean diet continues to be recommended and discussed, a new diet with a geographic connection is emerging: the Nordic Diet. The popularity of this diet is rooted in the longevity enjoyed by Scandinavian dwellers — especially Icelanders, who are Europe’s longest living people (although, that distinction is only held by Icelandic men so maybe as a woman I should be looking elsewhere for health food tips!).

Earning a lot of media attention in the UK, the Nordic diet features a high protein-to-carbohydrate ratio as well as an abundance of cool climate foods such as high-antioxidant blueberries and cruciferous cabbage. A pillar of the Nordic diet is skyr (pronounced skeer), a dairy product from Iceland that I saw for sale in New York City grocery stores recently. With next to no fat and exceptional levels of calcium and protein, skyr is being marketed as a snack for active people and as a supplement to a healthy lifestyle. I asked my friend chef Michael Olson (whose family roots are Icelandic) about skyr; he says it’s thinner than commercially made Canadian yogurt and a bit tarter, making it similar to kefir.

Although there are predictions that the Nordic Diet will be the next big trend in countries that have cold weather climates (like Canada and the UK), with Santa Claus as the current spokesperson for Northern climes, I’m thinking they may need to do a lot more marketing to get people to try this eating regime!

Have any of you tried skyr? If so, what did you think of it? Do you feel younger since you ate it or pretty much the same?

The locavore movement has been on my trend tracker’s radar for quite some time but never during my research have I found anything as inspiring as the story of the Go Ontario! Granola Bars.

Every ingredient in these additive-, preservative- and trans fat-free bars is sourced from an Ontario farm and the bars are, in turn, sold to Ontario schools to use for fundraising snack programs.

I just love this idea and hope it’s the beginning of a trend that sees more companies returning to regional food production. It’s a great way to reduce the carbon footprint of packaged foods and a wonderful way to support local producers.

Although these bars won’t be available at retail for a little while longer, I can tell you that I’ll be trying them as soon as they are on the shelf.

Other than produce and ingredients like honey and maple syrup, are products that use all local ingredients available in your area?

Help! I have a split personality! 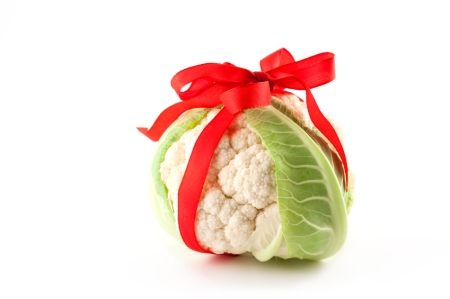 A recent study conducted by Cornell University scrutinized 770 family cooks to discover that there are five distinct cooking personalities among home cooks:

1. “Giving” cooks (22%) are enthusiastic about cooking and specialize in comfort food, particularly home-baked goodies.
2. “Methodical” cooks (18%) rely heavily on recipes, so their cooking is strongly influenced by the cookbook they use.
3. “Competitive” cooks (13%) think less about health and more about making the most impressive dish possible.
4. “Healthy” cooks (20%) often serve fish and use fresh ingredients, but taste isn’t the primary goal.
5. “Innovative” cooks (19%) like to experiment with different ingredients, cooking methods and cuisines, which tends to lead to healthier cooking.

These profiles were developed to predict how the cooking style of each household’s primary home cook may affect the health of an entire family. The theory discussed in the article is that the primary home cook’s style influences around 70% of the foods we eat, not just when we eat meals at home but also children’s lunches, snacks eaten outside the home, and even what family members order at restaurants.

Can you identify yourself in any of these profiles? I can see myself as a ‘giving cook’ on some days but also as an ‘innovative cook’ on most days. Does this mean I have split culinary personality disorder?